Ms. Lennon’s class also made some Aztec art such as sun stones from clay. Next the class will make some mosaic masks. 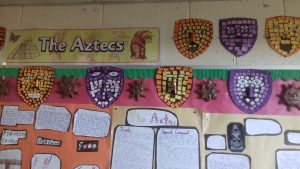